skip to main | skip to sidebar

Over the holidays, one thing that happened was that I was able to get a new phone while in America, as part of a school group, a Lumia 510, which I'm using now, as I just realized I could do this. In America, we went to California, where we stayed at Knott's Berry Farm, going to the theme park there, as well as going to Disneyworld and later to Universal Studios, where we had a look at some of the sets on a tour, along with seeing some nice new types of rides, involving a surround screen and the car tilting, which I thought was great, and went to San Diego after that for a couple of days, having pizza and pasta mainly for dinner. In America, I noticed that there was alot of melted cheese on the food, which was very nice. After San Diego, we went to San Francisco, to stay with a host family for about a week. During this time, we were taken on a tour just about every day, and I especially liked going to Alcatraz, getting a new hat there, while we also went on the Midway, a retired aircraft carrier, where I got a new bag that's super handy. I was staying with another student at the host family's house, and we all went out to watch Jack Ryan at the cinema, and also went to the Cheesecake Factory for dinner once, which had a really long waiting line, but I had a nice cheeseburger. Actually, I almost always had a cheeseburger at a restaurant. I also got to spend a day at school in Livermore, where the other students were normal. Mostly. I noticed that Spanish is kinda like Japanese, too.
Anyway, I got back a few weeks ago, and I'm in the mood to review anime. So I'll probably be doing some of that sometime soon.
Posted by Skardae at 2/04/2014 09:22:00 PM 1 comment:

So for those who know me, you know I love anime, and one of my all-time favorites is Clannad. On the surface, Clannad is your typical high school drama, wherin the main character, Okazaki, gets into all sorts of mischief and meets an excessive amount of cute girls. Now, after looking at Fitzgerald's The Great Gatsby as part of school literature, I've come to realize that there are a number of symbols used in Clannad, one of the most obvious being the snow, the lights, and the girl and her robot friend. But before looking at the symbols, I wanted to look at the characters involved. And where better to start than with the lead character, Tomoya Okazaki. 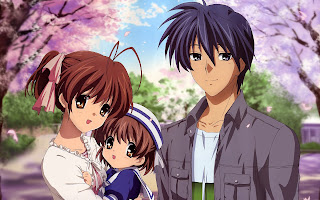 Okazaki (though it's his last name, everyone uses it) is introduced as a poor person. He turns up late to school, he fights with his father, he apparently gets into fights with other people, and doesn't have much faith in himself. Now, the main thing about Okazaki is that he seriously grows up, much more so than the majority of other characters, anime or not. We soon see that he's really not so bad, unless his compatriot Sunohara is involved. Then someone gets hurt, and it's usually Sunohara. But you realize that even those two are actually good friends, when they always stick together when it gets serious. So while Okazaki is actually willing to help others out, as he does almost everyone (that's the premise of the game Clannad is based off), he's still not as mature as most of the girls in the drama club (but moreso than Sunohara), and lacks understanding of many things. He doesn't want to listen to anything his father has to say, and tries to stay the drama club's founder and his more-or-less girlfriend, Nagisa's house. There, he meets her parents, who I'll also give a separate section, as they're very important people, and Okazaki finds what he pictures as a normal family, compared to his lone, drunkard father. They're fun, bright, and most importantly, they put their daughter above all else. After meeting Nagisa, he begins to get his act together, in what is perhaps an effort to impress her, although Nagisa is already portrayed as someone you don't want to let down, because she's so naive and believes in everyone. We begin to see the more dramatic changes in Okazaki during the After Story. The following may contain spoilers, though I'll try not to ruin all the moments for you.
Okazaki's daughter, Ushio (yes, Okazaki also actually grows up and gets married, leading to issues with Nagisa's father, Akio) becomes Okazaki's lifeline when he goes through a hard time. He discovers how wonderful it is to be with her, and because of this, he comes to understand his father, and eventually makes up with him, and he also gains purpose, doing his best to help raise her.

I think I'll slowly get around to doing this series, though there's alot to talk about; the music; Nagisa's theme being one of the most important, the characters, the colour and settings, the symbols; the sakura, the snow, the lights, the hill, the some of the quotes; Tomoya's lines in the opening scene, the lines of Nagisa's play, and probably some others I'll think of while writing.
If you're interested, here's a link to the series on youtube. And whatever you do, don't watch the movie. It'll ruin the series and isn't very good at all. And don't read the comments, they can spoil the series.

I haven't posted for a long time. So, what's new in my life? Well, firstly, I was going to talk about my time playing League of Legends (LoL). LoL is a MOBA type game, that is, one that is based of DotA. It involves the player controlling a champion throughout the game, who gains in levels and items. In a standard game, there are five players on each team. They start in opposite corners of a square map, with three lanes connecting the two bases, one directly through the middle, and two running along the edges. Your aim is simply to destroy the enemy base. Each lane has three towers, and one inhibitor. Towers are tough, and deal alot of damage, and the easiest was to destroy them is to kill enemy minions, so that yours will go to the tower, take hits from it, while you destroy it. Each round usually goes for 40-60 mins. There are alot of good videos on youtube of these games. I played DotA a few years ago, but I stoppes because it was too confusing to play. LoL is alot simpler, with an actual tutorial to teach you the basics. It's also free to play, if anyone's interested in playing it themselves, which was one of the main appeals to me, being a fun F2P game.

Another game that I've taken an interest in recently is Soul Calibur, which is basically a 3D fighting game, involving two players who are in a small arena and have to beat each other. I'm currently saving for SC5, but I already have an interest in a few of the characters, mainly Tira and Ezio.